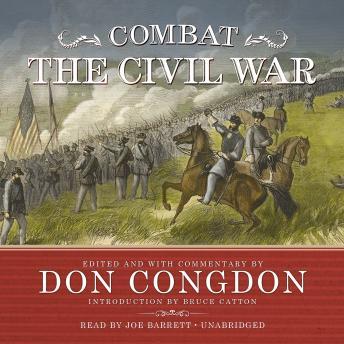 This is the book Civil War enthusiasts have been waiting for.
There are many, many studies of the Civil War. Books have been written on its economic effects, its political causes, its relationship to western expansion. But the real fascination of the war is the story of combat, men in battle. Combat: The Civil War tells this story in the words of men who actually marched into battle. We share their experiences, their fears, and their moments of bravery at Vicksburg, on board the Monitor, at Gettysburg, and at the bloody battle of Antietam. These eyewitness accounts are interspersed with brief commentaries by some of our most respected historians—Douglas Southall Freeman and John Pullen, for example—who illuminate the accounts by placing them in their proper context.
Those who have been looking for one volume that manages to tell the whole story of the war in a clear way need look no further. Combat: The Civil War is a gritty and readable history. Immediate and at the same time informative, here is that rare work that actually brings the struggles and characters of the past to life.