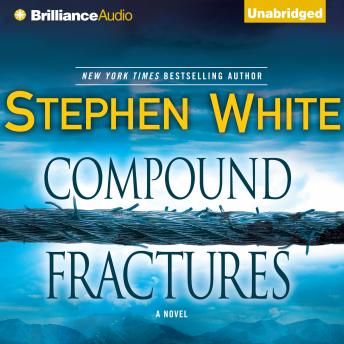 In Line of Fire, Dr. Gregory found himself assailed by danger from every direction as he struggled with circumstances beyond his control. Authorities were closing in on Alan and his friend Sam Purdy for their roles in a woman’s death years earlier. Alan was struggling to deal with the emotional breakdown of his longtime friend Diane after she discovered evidence of her husband’s infidelity. By the end, Alan’s personal life and his career were in danger of complete collapse. But Line of Fire merely set the stage. In Compound Fractures, Alan is forced to acknowledge that the perils that may bring him to his knees are not the dangers he recognizes, nor are they orchestrated by the nemesis he has long feared. Instead he is confronted by unexpected threats from unanticipated adversaries and by intimate betrayal from those who have been closest to him. He is compelled to reconsider what he has long believed about trust and about love while he is trying to cope with overwhelming loss and grief. To protect himself, Alan must revisit the cruel ethical dilemma that turned his life upside down as a young psychologist. He has to judge whether the people reentering his life after long absences are friends or foes. He has to make sense of echoes of distant tragedies while he decides if there is anyone he can really trust. And as the clock ticks down, he must solve a deadly mystery in Eldorado Springs that has been brewing for more than a decade. At times full of pathos, at other times replete with White’s distinctive wry humor, Compound Fractures delivers the entrancing characters, the suspense, the intricately plotted story lines, and the unexpected twists that readers have come to expect.