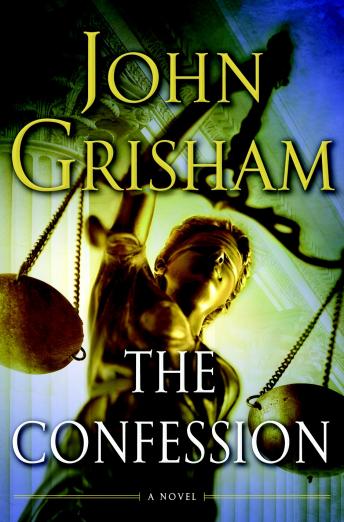 The Confession: A Novel

#1 NEW YORK TIMES BEST SELLER • An innocent man is about to be executed. Only a guilty man can save him.

For every innocent man sent to prison, there is a guilty one left on the outside. He doesn’t understand how the police and prosecutors got the wrong man, and he certainly doesn’t care. He just can’t believe his good luck. Time passes and he realizes that the mistake will not be corrected: the authorities believe in their case and are determined to get a conviction. He may even watch the trial of the person wrongly accused of his crime. He is relieved when the verdict is guilty. He laughs when the police and prosecutors congratulate themselves. He is content to allow an innocent person to go to prison, to serve hard time, even to be executed.

Travis Boyette is such a man. In 1998, in the small East Texas city of Sloan, he abducted, raped, and strangled a popular high school cheerleader. He buried her body so that it would never be found, then watched in amazement as police and prosecutors arrested and convicted Donté Drumm, a local football star, and marched him off to death row.

Now nine years have passed. Travis has just been paroled in Kansas for a different crime; Donté is four days away from his execution. Travis suffers from an inoperable brain tumor. For the first time in his miserable life, he decides to do what’s right and confess.

But how can a guilty man convince lawyers, judges, and politicians that they’re about to execute an innocent man?

i really enjoyed listening to this book, the narrator captivated me. i laughed and cried my way through another John Grisham book.

I thoroughly enjoy all of Grisham's books and although the ending was rather predictable, it was still a good listen. Beats listening to the radio on 6 hour trips and his books make the time go much faster.

This book deeply affected me and made me question the US legal system. Great book!

I still enjoy Grisham books, although another difficult story due the crime and the reality of capital punishment; basically our legal system and (sub)human nature. The only reason this does not rate 5 stars is the quality of the CD's, several skips.

I hung on every word, every syllable, this was one of the best books ever. John Grisham drives it home once again. I recommend this book as number 1 on my list.

I endured "The Appeal" and jumped right into "The Confession" thinking that I wouldn't be let down again. I was wrong. While I have thoroughly enjoyed his earlier books and therefore considered myself a fan it's apparent to me that Mr. Grisham considers himself successful enough that he has earned the right to advance his political views via his books. To add insult to injury he evidently also thinks his past success excuses his mind numbing rambling about the details of which the reader can second guess a chapter before.

Basically a lengthy apology in favor of abolishing the death penalty in murder mystery format. I felt duped into wasting my time wading through Grisham's rhetoric only to find that the ending packed absolutely no punch at all.

John Grisham has lost his touch. Just no more suspense in his novels. Lost is his trilling suspense that I loved in his earlier works such as The Runaway Jury, The Last Juror, and The Partner (my favorite). And, no narrator can compare to the late Frank Muller; but, I really didn't care for Sewell. Just too bad that this work is disappointing.

John Grisham has always been one of my favorite authors, this was a good story, but I would have to agree with others. It was repetative in some chapters, and very long. I think the abridged version would have been better for this one.

Way too long, should opt for the Abridged version. About one-third in I put in the final CD to find out what happened, don't feel like I missed a thing. Not Grisham's best by a long shot.

I have read quite a few books by John Grisham in my day and for the most part I have enjoyed them. However, this one just felt laborious to get through. The ending wasn't all that satisfying and even though the angle on the Texas State death penalty seemed fresh, I didn't love this book. I wonder how much of what Grisham wrote about the process of being executed (and attempts to get a last minute stay) were fictionalized. Perhaps not too much considering the corruption in his book was hardly far fetched. It was truly heartbreaking in moments and then people's emotions or feeling were glossed over in other parts. I realize Grisham is a legal writer primarily, but I felt it was a disconnect in that way especially with the heavy subject matter at hand. I can't say it isn't worth listening to, but it wasn't my favorite.

Don't know why he even bothered having a plot to this book, the veil over the pontificating isn't even thin. This book is basically a treatise on why the Death Penalty is evil. Just not much of a story

Good story. Easy to understand how you could be 'swayed' by folks. Does make you think twice about the death penalty.

Slow and more detailed than it needed to be. It was as though he was trying to find ways to lengthen the book. The ending was depressing and unsatisfying.

VERY GOOD , Excellent narrator. How many times has this REALLY happened.

I have loved reading and listening to Grisham in the past. BUT, this one got boring fast. Loved the story, but not how often the book got monotonous.

Absolutely wonderful, heartbreaking - hung on every word. This is the John Grisham I like. Highly recommend it.

One of his best in awhile. A compelling anti-death penalty story.

This book takes me back to what I loved about reading John Grisham novels. I really enjoyed the suspense and tension... and he got me thinking about moral issues. Great book!

I love John Grisham's novels, and this one is certainly one of his best. It borrows some themes from The Chamber and An Innocent Man, but the plot is not dull and there are plenty of interesting twists and turns. It is a compelling look at the failings of the legal system, prejudice, lynch mentality and the fundamental flaws in the ideas behind legal killing. If you supported the death penalty before, this story might change your mind.