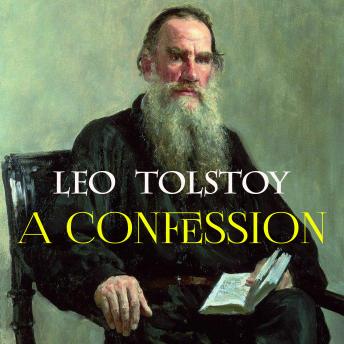 A Confession, or My Confession, is a short work on the subject of melancholia, philosophy and religion by the acclaimed Russian novelist Leo Tolstoy. It was written in 1879 to 1880, when Tolstoy was in his early fifties.
The book is a brief autobiographical story of the author's struggle with a mid-life existential crisis. It describes his search for the answer to the ultimate philosophical question: 'If God does not exist, since death is inevitable, what is the meaning of life?.' Without the answer to this, for him, life had become 'impossible'.
The story begins with the Eastern fable of the dragon in the well. A man is chased by a beast into a well, at the bottom of which is a dragon. The man clings to a branch that is being gnawed on by two mice (one black, one white, representing night and day and the relentless march of time). The man is able to lick two drops of honey (representing Tolstoy's love of his family and his writing), but because death is inevitable, he no longer finds the honey sweet.
Tolstoy goes on to describe four possible attitudes towards this dilemma. The first is ignorance. If one is oblivious to the fact that death is approaching, life becomes bearable. The problem with this for him personally is that he is not ignorant. Having become conscious of the reality of death, there is no going back.