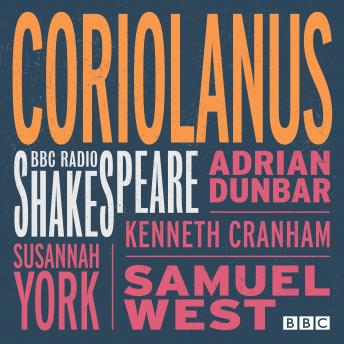 BBC Radio has a unique heritage when it comes to Shakespeare. Since 1923, when the newly formed company broadcast its first full-length play, generations of actors and producers have honed and perfected the craft of making Shakespeare to be heard. In the acclaimed BBC Radio Shakespeare series, each play is introduced by Richard Eyre, former Director of the Royal National Theatre. Revitalised, original and comprehensive, this is Shakespeare for the new millennium. Coriolanus tells of a proud Roman general who captures the town Corioli but subsequently falls from favour with the Roman people. He allies himself with the Volscians and leads an attack on Rome - but allegiances are won and lost before the final tragic end. Samuel West, Susannah York and Adrian Dunbar star.