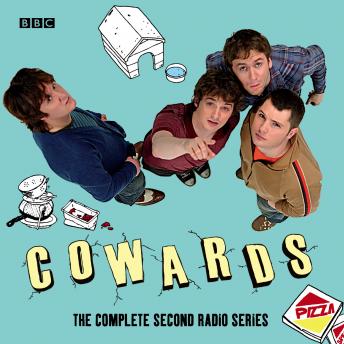 The complete second series of the smart and surreal sketch comedy from Tom Basden, Stefan Golaszewski, Tim Key and Lloyd Woolf. In the second BBC Radio 4 series of 'Cowards', a whole new batch of hapless and hopeful nearly-men battle with the challenge of everyday life, doing their very best to meet the demands of the modern world. Bikes start talking, genies appear that force you to guess what your three wishes are, bridges across the channel are built out of Lego, Parky loses it and a young man tries to audition for Barbara Windsor’s part in 'EastEnders'. There are also new creatures made from splicing a cow with an apple, social experiments into squatting while on the pull, wedding proposals in PC World, a sightseeing tour around Guantanamo Bay and a Garden of Eden where it rains chocolate and cows sing. Wry, left-field observations and detailed characterisation make this, their BBC Radio 4 series, a joyous and memorable sketch show experience. The Cowards – as seen on TV’s BBC Four. ‘Re-inventing the tired art of sketch comedy... these four are brilliant’ - Observer.