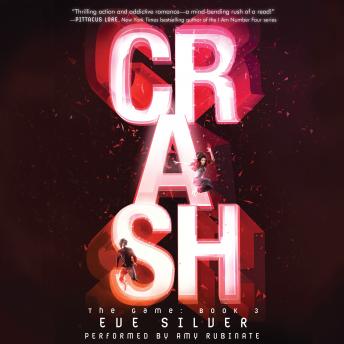 Fans of the 5th Wave series will devour the pulse-pounding conclusion to The Game trilogy, by bestselling author Eve Silver, about teens pulled in and out of an alternate reality where battling aliens is more than a game—it's life and death.

As her dad and best friend lie dying in the hospital, Miki is almost certain the Committee is trying to sabotage her life. The Game is glitching. The missions are more frequent, the alien Drau more deadly, and whatever has been tracking her thoughts more intrusive. The only thing holding Miki together is her boyfriend, Jackson, but somehow telling him how much she needs—and loves—him feels like the most terrifying challenge of all.

Can Miki and Jackson make it through the final mission alive and win the Game before the walls between their alien-fighting nightmares and the real world come crashing down? Or will the world and everyone Miki loves disappear forever?

Crash is the fiercely satisfying conclusion to a trilogy Pittacus Lore, New York Times bestselling author of the I Am Number Four series, raves is packed with "thrilling action and addictive romance—a mind-bending rush of a read!"