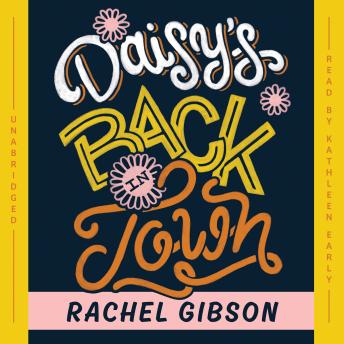 Daisy's Back in Town

Daisy Lee Monroe thought she'd brushed the dust of Lovett, Texas, off her high-heeled shoes years ago, but she's come back home only to find that little has changed. Her sister is still crazy, and her mom still has pink plastic flamingos in her front yard. And Jackson Lamott Parrish, the bad boy she'd left behind, is still so sexy it hurts. She'd like nothing better than to avoid this particular man, but she can't. Daisy has something to say to Jackson, and she's not going anywhere until he listens.

Jackson learned his lesson about Daisy the hard way, and now the only word he's interested in hearing from Daisy's red lips is goodbye. But she's popping up everywhere, and he doesn't believe in coincidence. It seems the only way to keep her quiet is with his mouth, but kissing Daisy had once been his downfall. Is he strong enough to resist her now? Strong enough to watch her walk out of his life again? Strong enough to make her stay?

Daisy's Back in Town