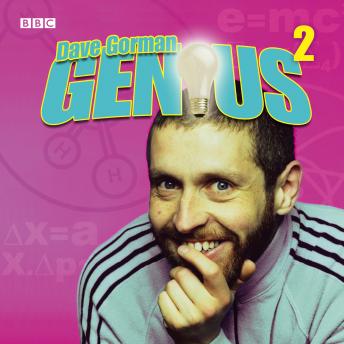 In a quest to unearth a genius idea, Dave Gorman, with the help of special guests Johnny Vegas, Armando Iannucci, Chris Addison, Brian Sewell, Carol Vorderman and Sid Waddell pore over a pot pourri of plots, plans, inventions and scams sent in by Radio 4 listeners. Will they unearth some genuine gems of genius? And which pitch will win the legendary Genius trophy? In this complete second series, ideas proposed include: Bovril as a fizzy drink, turning parking meters into fruit machines (which include jackpots), weighing scales built into shoes, clairvoyant newsreaders, virtual reality headsets for chickens, socks sold in threes (because one always gets lost) and the best thing since sliced bread – perforated bread. If you’ve ever had an ingenious invention, a sublime plan for solving problems both small and large, or a twisted scheme for making the world a better or more interesting place, then ‘Genius’ is the midwife to your brainchild.