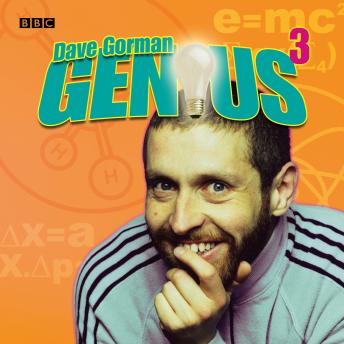 In a quest to unearth a genius idea, Dave Gorman, with the help of special guests Germaine Greer, Gyles Brandreth, Matthew Wright, Rob Newman, Charlie Brooker and Simon Munnery pore over a pot pourri of plots, plans, inventions and scams sent in by Radio 4 listeners. Will they unearth some genuine gems of genius? And which pitch will win the legendary ‘Genius’ trophy? In this complete third series, ideas proposed include: getting people in old folks’ homes to watch CCTV of crime hotspots (instead of daytime TV), inventing new swear words, claiming the East and West Poles for the UK, a Conveyor Duvet, Lego prisons, talking parrots (for people who can’t speak), a two-year dog – and an improved Genius voting system! If you’ve ever had an ingenious invention, a sublime plan for solving problems both small and large, or a twisted scheme for making the world a better or more interesting place, then Genius is the midwife to your brainchild.