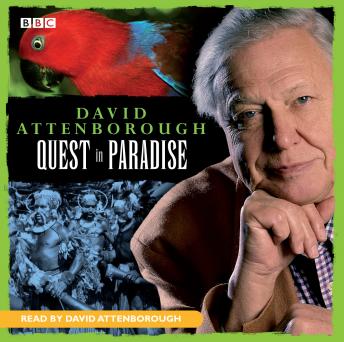 Following his expedition to Indonesia, as told in Zoo Quest for a Dragon, David Attenborough's next animal collecting and filming trip – as part of the successful Zoo Quest television series – was to New Guinea, home of the exotic Birds of Paradise. The quest demanded hazardous treks across treacherous terrain in the Jimi Valley and on the edges of uncharted territory. But the arduous adventures were finally rewarded when, in front of the camera, a Count Raggi’s Bird of Paradise enthralled him with its frenzied dance. In this audio release, David tells of his adventures during the trip: being an onlooker at a formal lovemaking ceremony, seeing the skills of ritual axe making, trying to master pidgin English and witnessing a ‘sing sing’ at which hundreds of tribesmen came together from all parts of the country. Specially recorded for audio, the magical voice of the master broadcaster entertains and educates in this fascinating account of life in the wilds of the South Pacific.