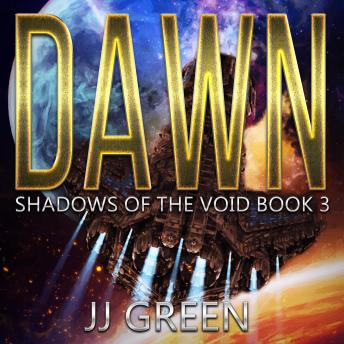 A Dark Secret – A Deadly Shadow – A False DawnUnder orders from Earth’s Global Government, the crew of the Galathea set out for the colony world of Dawn, where the hostile aliens that infested their ship can be rooted out.

Jas Harrington learns the aliens are called Shadows, and that there has been a conspiracy of silence surrounding the threat they pose to the galaxy. She also finds that there’s more to Dawn than meets the eye.

On the new world, she discovers the horrible truth of what the Shadows do to victims caught in their traps.

She discovers what Dawn’s inhabitants are hiding.

She discovers that the planet’s security has been penetrated.

As the Shadows draw near, Jas battles desperately to free the people of Dawn from their dark secrets. If she doesn’t succeed, no one can survive.

Dawn is book three in the fast-paced, action-packed Shadows of the Void space opera serial.