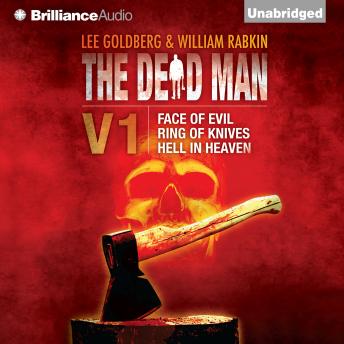 The Dead Man Vol 1: Face of Evil, Ring of Knives, Hell in Heaven

Matthew Cahill is a simple man leading a quiet life...until he is tragically killed in an avalanche at a ski resort. Three months later his corpse is found and sent to the morgue....But then something inexplicable happens. He wakes up.Now he can see evil...as a festering rot that eats people alive from the inside out. And he can see Mr. Dark, the horrific figure who gleefully spreads it like a plague...and who is the only one who can tell Matt whether he is still a man...or the walking dead.For Matt, each day is a journey into a supernatural world he knows nothing about...a quest for the answers to who he is and what he has become...and a bloody fight to save us, and his soul, from the clutches of pure evil.Here are the first three unforgettable novels in Lee Goldberg & William Rabkin’s The Dead Man saga—“Face of Evil,” “Ring of Knives,” and “Hell in Heaven”—a horrifying new series that Post-Modern Pulps hails as “a direct spiritual descendant of the sorts of awesome pulp action adventure tales that the greats like Robert E. Howard loved to write!”