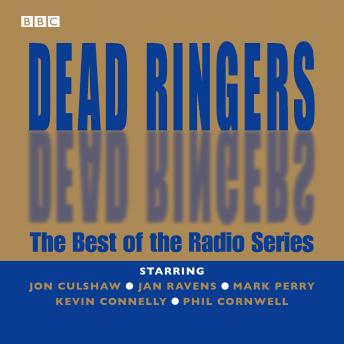 Dead Ringers: The Best Of The Radio Series

This compilation contains the funniest sketches of the award-winning and immensely popular BBC Radio 4 series. Featuring the unique vocal talents of Jon Culshaw, Jan Ravens, Mark Perry, Kevin Connelly and Phil Cornwell; ably assisted by Alistair McGowan, Simon Lipson and Kate Robbins; this is cutting-edge comedy combined with razor-sharp impressions from the hilarious Dead Ringers team. The Archers goes interactive, Ruth gets some bad news ('Oh nooo!') and Brian 'Hard Man' Perkins takes on The Weakest Link's Anne Robinson - and wins. Patrick Moore books a taxi to Uranus for a very reasonable five dollars, Charlotte Green gets sexed-up ('Is that a gun in your pocket or are you just pleased to hear me?') and Doctor Who calls directory enquiries in his search for The Master, and then phones himself - twice! Among your other favourites coming under fire in this comical collection are George W. Bush - and his search for Saddam's 'Penguins of Mass Destruction' - Rolf Harris meets Droopy in Cartoon Animal Hospital, Zippy from Rainbow tries Faking It as Cherie Blair and You and Yours celebrates 1,000 years of broadcasting. There's a new reality show to end them all (Desert Island Discs, featuring a real castaway on a desert island) and the Queen appears on Royal Brain of Britain... Celebs take cover - these superb sketches are the finest moments from Dead Ringers!