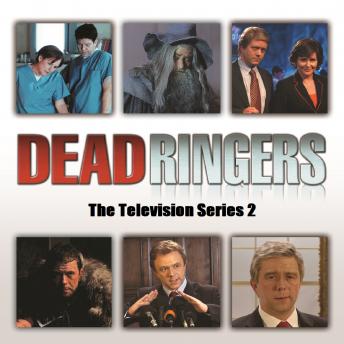 The award-winning series Dead Ringers is back with highlights from its second television series. A huge hit on BBC Radio 4, Jon Culshaw, Jan Ravens, Kevin Connelly, Mark Perry and Phil Cornwell star once again in the best impression comedy on TV. In this startling and hysterical alternate universe, David Dickinson is 'Auction Man', Mastermind gets 'sexed up', and Simon Schama and David Starkey battle it out - literally - in order to become television's leading historian. In other wicked moments, Delia Smith demonstrates How to Spectate, Ellen MacArthur tries her hand at some mundane chores, and Carry On Matron gets a Hollywood makeover. Others joining Tony Blair, George W. Bush, Ozzy Osbourne, Gandalf and Greg Dyke include card-playing comedy duo Osama Bin Laden and Saddam Hussein. So, take a ringside seat for another TV swipe at the famous - and infamous - courtesy of Dead Ringers.