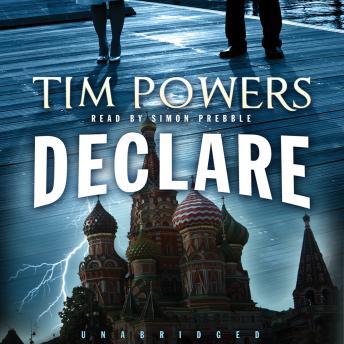 In his eleventh novel, Tim Powers takes his unique brand of speculative fiction into uncharted territory, instilling the old-fashioned espionage novel with a healthy dose of the supernatural.

As a young double agent infiltrating the Soviet spy network in Nazi-occupied Paris, Andrew Hale finds himself caught up in a secret, even more ruthless war. Two decades later, a coded message draws Professor Andrew Hale back into Her Majesty’s Secret Service. Elements from his past are gathering in Beirut, including ex-British counterespionage chief and Soviet mole Kim Philby, and a beautiful former Spanish Civil War soldier-turned-intelligence operative, Elena Teresa Ceniza-Bendiga. Soon Hale will be forced to again confront the nightmare that has haunted his adult life: a lethal unfinished operation code-named “Declare.” From the corridors of Whitehall to the Arabian Desert, from post-war Berlin to the streets of Cold War Moscow, Hale’s desperate quest draws him into international politics and gritty espionage tradecraft—and inexorably drives Hale, Ceniza-Bendiga, and Philby to a deadly confrontation on the high glaciers of Mount Ararat, in the very shadow of the fabulous and perilous biblical Ark.

This title is due for release on December 22, 2010
We'll send you an email as soon as it is available!