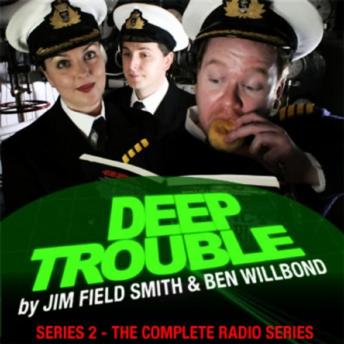 The hugely talented Best Newcomer Perrier winner (1999) Ben Willbond and Perrier nominee (2005) Jim Field Smith ('Dutch Elm Conservatoire') have teamed up again for the second series of their sub-sea sitcom that Time Out called 'a cracker' and the Sunday Telegraph described as 'written with nutty aplomb'. February 2012. Somewhere in the North Atlantic. In an increasingly uncertain defence environment, a deadly new arms race has begun. In an attempt to secure her boundaries, Britain has deployed the very latest sub-sea military technology. Beneath and beyond the front line, these are the adventures of the HMS Goliath. A 55,000 tonne M-Class nuclear stealth submarine, prowling 5,000 metres below the surface, manned by idiots. This is the complete Series 2, with a new regular crew member played by Alice Lowe ('Garth Marenghi'). In the first episode, a noxious gas, a beetroot smoothie and bad haircut spell disaster for the crew. In 'Episode 2', it's time for a snowball fight, a French telephonist, some spinach and an Mk7 belt-fed anti-tank gas-cooled heavy machine gun. In 'Episode 3', an overheating nuclear reactor means a dangerous encounter for Captain Wade with a lobster, Commander Fairbanks with a jet fighter and Lieutenant Trainor with a rather large Prince Albert. Finally, 'Episode 4', Goliath is coming home, and as the crew prepare the end-of-tour revels, Sub-Lieutenant Barry finds a donkey, Captain Wade finds a baby, Commander Fairbanks finds an Admiral and Lieutenant Trainor finds an unexpected jazz band...