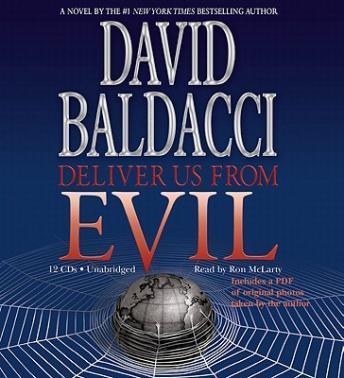 Deliver Us from Evil

Locked in a battle of nerve and wits, a mysterious intelligence operative and a vigilante agent race against time to take down a greedy businessman bent on destroying millions of lives in this #1 New York Times bestselling thriller.

Evan Waller is a monster...

He has built a fortune from his willingness to buy and sell anything . . . and anyone. In search of new opportunities, Waller has just begun a new business venture: one that could lead to millions of deaths all over the globe. On his trail is Shaw, the mysterious operative from The Whole Truth, who has tracked Waller to Provence and must prevent him from closing his latest deal. But someone else is pursuing Waller: Reggie Campion, an agent for a secret vigilante group headquartered in a musty old English estate--and she has an agenda of her own.

Hunting the same man and unaware of each other's mission, Shaw and Reggie will be caught in a deadly duel of nerves and wits. Hitchcockian in its intimate buildup of suspense and filled with the remarkable characters, breathtaking plot turns, and blockbuster finale that are David Baldacci's hallmarks, DELIVER US FROM EVIL is one of the most gripping thrillers you'll read this year.

If any book needed abridging, this is it. For me, long with only a very few interesting parts. I would not recommend it.

I love Baldacci's books, however, I had a hard time getting through this one. I did finish it, and I am glad that I did, but I like the original Baldacci style writing. I would recommend it to some, probably better for men.

I have read/listened to all of Baldacci's books, and enjoyed them all. I did not like this book, though. Too much time was spent on character development of the antagonist and too many details of gruesome violence. Bring back the old Baldacci style. I do not recommend this book to anyone.

Deliver Us From Evil by David Baldacci is about the grossest book I have ever read. In fact, I quit during the vivid description of the torture of a man and had nightmares about it. And I have always liked David Baldacci's books.

David Baldacci did it again! This book kept me entralled. It is gory at times but if you can get through those parts, the rest is worth the read!!!!

This CD by David Baldacci "Deliver Us From Evil" was too gruesome. I deleted the rest of his books on my list.

This book was way too long. Overall story was ok and what few "action scenes" there where did come off as solid. The author just took entirely too long to actually "get into the meat" of the story.

For years I put this author in the same category as Grisham and Isles, but this is a second rate formula story, that does not measure up. This lacks the spark and originality of his other works and relates way too much in the way of graphic torture interspersed with too slow a pace. I slogged through about five discs and sent it back....something I never thought I would do with a Baldacci novel.