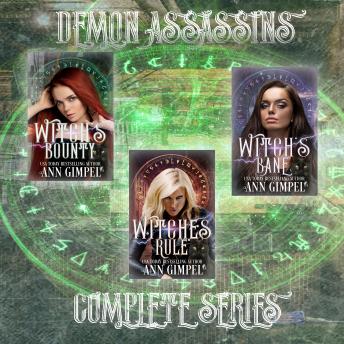 One of three remaining demon assassin witches, Colleen is almost the last of her kind. Along with her familiar, a changeling spirit, she was hoping for a few months of quiet, running a small magicians' supply store in Fairbanks, Alaska. Peace isn't in the cards, though. Demons are raising hell in Seattle. She's on her way to kick some serious demon ass, when a Sidhe shows up and demands she accompany him to England to quell a demon uprising.

Demons strike in the midst of Colleen's wedding, and Roz launches desperate measures. As she shape-shifts to keep one step ahead of evil, it takes her mind off her other problems. Personal ones. She burned through a couple of marriages and hooked up with a string of loser men before, after, and in between. Though she wants to be happy for Colleen, the jealousy bug bit deep. In Roz's secret heart, she's attracted to Ronin, one of the Daoine Sidhe. He's so profanely beautiful she can barely breathe around him, but he's also headstrong and arrogant. Not good partner material-unless she wants to end up dusting her heart off one more time.

Jenna's a special witch, sort of, when her magic works, which it often doesn't. Frustration about her limited power eats at her. It would be pathetic to get killed for lack of skills a teenager could master. Tristan is a Sidhe warrior. He fell hard for Jenna, but hasn't had an opportunity to act on the attraction beyond a few kisses. Kiernan is haunted by visions, particularly an apocalyptic sending that seems to be coming true. A confirmed bachelor, he doesn't understand his attraction to Jenna, but it's so strong he can't fight it. After a while, he doesn't even try, despite recognizing Tristan's claim to her. Startling truths surface about Jenna's magic, and then there's the problem that she's falling in love with two very different men.

This title is due for release on April 17, 2017
We'll send you an email as soon as it is available!