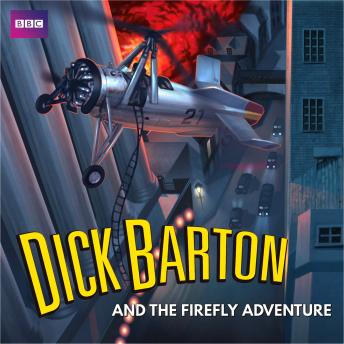 A full-cast radio drama from the 1940s starring Douglas Kelly as Dick Barton. Originally produced for Australian radio, Dick Barton and the Firefly Adventure tells of the arrival in Britain of the American master-criminal Ferraro. Operating a violent protection racket, Ferraro extorts money from property owners across the capital. Those who ignore Ferraro's threats see their homes and businesses destroyed. Ferraro's many arson attacks soon earn him a nickname: the Firefly. Can Dick Barton intervene?

Special additional bonus features for this release include:

'The Making of Dick Barton - Special Agent'
An all new specially-produced 50 minute documentary covering the history of 'Dick Barton - Special Agent' - featuring a wealth of clips from the series and archive interviews with the original cast and crew. Other special archive material includes an extract from a recently discovered 1948 BBC radio episode; an out-take from an original 1949 studio recording session; a 1947 Australian radio promotional recording and a number of quotes taken from previously unpublished production paperwork.