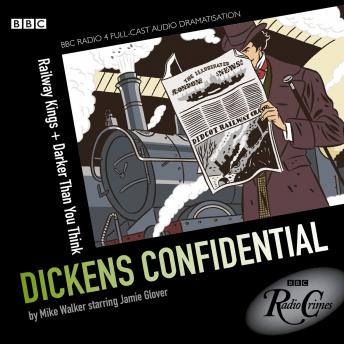 The young Charles Dickens started his career in journalism, and these two plays take an imaginative look at how his desire to bring the news to the masses could have introduced him to a world of crime and corruption. In Railway Kings, Dickens is Editor of campaigning weekly The Herald, and has just appointed a new Chief Correspondent. Young Jack Marshall’s first task is to find out who is responsible for a tragic railway accident – an awkward investigation, for Railway King Joseph Paxton is a shareholder in the paper and his daughter, Agnes, is on the staff... Darker Than You Think sees The Herald’s team embroiled in a series of grisly murders. Bodies are being discovered in the Thames with dreadful injuries, and Inspector Leavett wants the culprit found quickly. Jack is sent to investigate but Agnes seems more interested in her new beau, a pioneering doctor, than in following the progress of his leads...