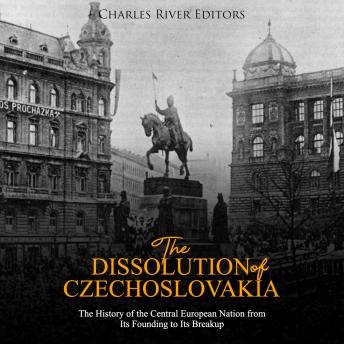 The Dissolution of Czechoslovakia, The: The History of the Central European Nation from Its Founding to Its Breakup

On New Year's Day 1993, Czechoslovakia broke into two separate countries, the Czech Republic and Slovakia. Thus ended one of the creations brought about by the Treaty of Versailles after World War I, and as a country that had existed for just under 75 years, Czechoslovakia spent most of its time under the tyranny of fascism or communism.
Of course, the country's origins go back far longer than the 1910s, and they were complex and convoluted. The very geography of central Europe meant this territory had been conquered and occupied many times over the course of history, and for much of the modern era, the area belonged to much larger empires, including the Holy Roman Empire, the Austrian Habsburg Empire, and finally the Austro-Hungarian Empire. Nevertheless, two distinct ethnicities had come to make up the bulk of the territory's inhabitants: the Czechs, predominantly in the areas of Bohemia and Moravia, and the Slovaks, in Slovakia. Both peoples had their own Slavic-based languages, but the languages were similar enough to be mutually intelligible.
Despite any ethnic similarities, the country that formed in 1918 among the ashes of the Austro-Hungarian Empire was by no means a "nation-state" as most people understand that term. In fact, much of the territory which bordered Germany was inhabited by ethnic German speakers, including one of Prague's most famous sons, the writer Franz Kafka. One of the 20th century's most celebrated authors spoke German as his first language. As such, the lands that became Czechoslovakia had usually existed in some kind of supranational system where identity was allowed to be relatively fluid.
Czechoslovakia would also play a crucial role in bringing about World War II, a sign that the area's nationalism, which ultimately split Czechoslovakia apart in 1993, had long spelled danger in a place where so many groups competed for power. The presence of German speakers would serve as a pretext for Hitler's acquisition of the Sudetenland, creating a crisis ahead of history's deadliest war and serving as a harbinger of things to come.
The Dissolution of Czechoslovakia: The History of the Central European Nation from Its Founding to Its Breakup examines how the multicultural nation was founded, the inherent tensions there, and how it eventually came apart.

Dissolution of Czechoslovakia, The: The History of the Central European Nation from Its Founding to Its Breakup