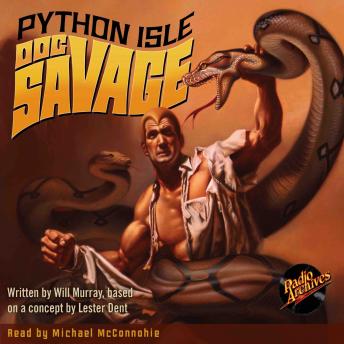 Doc Savage, the legendary superman scientist known as the Man of Bronze, captivated adventure readers from 1933 to 1949 in his own pulp magazine, and again in the 1960s through the 1980s in a million-selling Bantam Books paperback series. In 1990, Will Murray, heir apparent to Doc Savage originator Lester Dent, revived the famous Street & Smith superhero in a new series of exploits based on Dent's unfinished works. Writing as Kenneth Robeson, Murray brought Doc Savage back with Python Isle, a dramatic account of a long-lost pioneer flyer who returns to civilization with an exotic woman who speaks a lost tongue. From his towering skyscraper headquarters in New York, through a dangerous Zeppelin journey to Cape Town, climaxing on a serpent-haunted island in the forbidden reaches of the Indian Ocean, Doc and his iron comrades race to untangle a weird puzzle so deep the only clues can be found in the Bible!