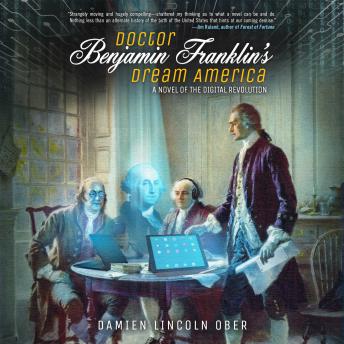 It is 1777, in a colonial America where the internet, social media, and cloud computing are already fully woven into the fabric of society. After seven years of war, George Washington has reappeared from off-the-grid to pin the British army at Yorktown. Independence is won, but with the countryside in ruins and internet commerce impossible, the former colonies teeter on the brink of collapse. Meeting in secret, a faction of the Founding Fathers codes a new error-proof operating system designed to stabilize the cloud and ensure everlasting American prosperity.

But not everyone is happy with the new format. Believing the draconian regulations of the new OS to be a betrayal of the hard-fought revolution, Thomas Jefferson organizes a feisty, small-government opposition to fight the overreach of Washington's Federalist administration. Their most valuable weapon is Doctor Benjamin Franklin's Dream America, a new open-source social networking portal that will revolutionize representative government, return power to the people, and make Congress and the Presidency irrelevant . . .

Set at the deathbed of each signer of the Declaration of Independence, Doctor Benjamin Franklin's Dream America is blazingly original alternative history, weaving futurism, science-fiction, and eighteenth-century politics into a saddlepunk retelling of the American Revolution.