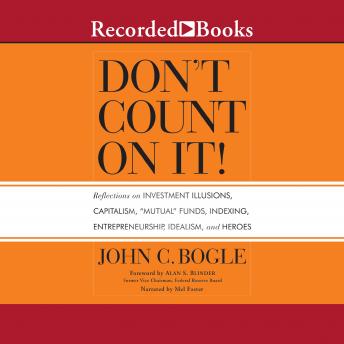 In his Foreword, former Federal Reserve vice-chairman Alan S. Blinder writes, "America's vaunted financial system let us down big-time during the raucous decade of the 2000s." In Don't Count on It!, John C. Bogle-a man Dr. Blinder refers to as "the conscience of Wall Street"-identifies modern capitalism's flaws, explains how we arrived at this economic crossroads, and examines how we can begin to repair the damage before it's too late. Don't Count on It! presents an anthology of Bogle's latest thinking, focused on how numbers deceive us into seeing things as other than they really are. He also presents a cogent analysis of the chinks in the armor of a financial system that has failed to live up to the responsibility owed to its individual and institutional investors. Read and learn from the wise counsel of Vanguard's founder about how we deceive ourselves into accepting illusory and evanescent numbers rather than focusing on fundamental and intrinsic reality. Bogle argues that we confuse the market of real investing with the market of expectations,disregarding the beauty of simplicity in favor of the wizardry that creates complex "products" that serve Wall Street at the expense of its clients. Specifically, Bogle discusses:  The unconscionably high costs of financial intermediation  The disgraceful failure of money managers and agents to abide by what should have been traditional fiduciary standards  The unfortunate consequences of the dominance of short-term speculation over long-term investment The subjects of Bogle's anthology go well beyond the investment markets, as indicated by the seven sections of Don't Count on It!-Investment Illusions, The Failure of Capitalism, What's Wrong with "Mutual" Funds, What's Right with Indexing, Entrepreneurship and Innovation, Idealism and the New Generation, and Heroes and Mentors. His book encourages readers to better understand our complex financial system, to examine it, to debate it, to challenge it, and to fulfill our duty to ask simple questions and demand answers that are understandable, intelligent, and, above all, wise.