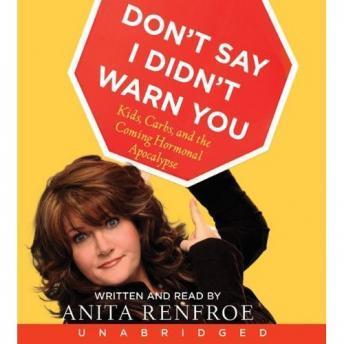 When I first learned that I was pregnant, I thought this was going to be the most blessed, beautiful, rose-petals-at-my-feet-and-bluebirds-lighting-upon-my-forearm time of my life.
Then I went for my first prenatal visit.
Which starts with a weigh-in.

From comedian Anita Renfroe, already beloved by women's groups and YouTube viewers across America, comes this hilarious and brazenly honest look at motherhood and middle age. Famous for her live performance of the 'Mom Song,' which barrels through everything a mom says to her kids in a single day to the tune of the 'William Tell Overture' (just two minutes and fifty-five seconds), in Don't Say I Didn't Warn You, Renfroe now turns her irreverent and daringly accurate comic eye to other female conditions.

In chapters with names like 'Brother, Can You Spare an Epidural?' and 'Playing Favorites (Or, As a Matter of Fact, I Do Love Your Brother More),' she dares to speak what other women are thinking'but don't say out loud. Using wit and honesty as her weapons of choice, Renfroe shares her deeply funny and relatable takes on everything from weddings to mammograms to every woman's never-ending quest for just one good photo of herself.

The world is a bounty of material for Renfroe; with it, she makes a feast of laughter for us all. Don't say we didn't warn you.