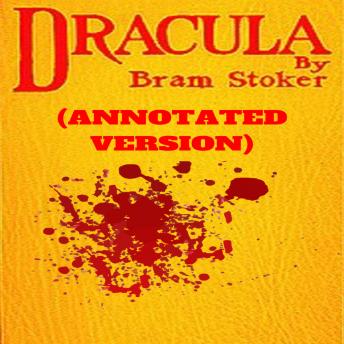 Dracula is an 1897 Gothic horror novel by Irish author Bram Stoker. It introduced the character of Count Dracula and established many conventions of subsequent vampire fantasy. The novel tells the story of Dracula's attempt to move from Transylvania to England so that he may find new blood and spread the undead curse, and of the battle between Dracula and a small group of people led by Professor Abraham Van Helsing.

Dracula has been assigned to many literary genres including vampire literature, horror fiction, gothic fiction, and invasion literature. The novel has spawned numerous theatrical, film, and television interpretations.

Dracula begins with the diary kept by Jonathan Harker—an English solicitor, or lawyer—as he makes his way from England to Eastern Europe. ... Harker arrives in the northern Romanian town of Bistritz and checks into a hotel Count Dracula has recommended to him. The innkeeper gives Harker a letter from the count.

Count Dracula is a tall, thin, pale, white-haired man with a long moustache. He also has hairy palms and long, sharp fingernails to match his pointed ears and long, sharp, white teeth. Although he appears well-mannered, there is something about him that inspires fear in Jonathan.