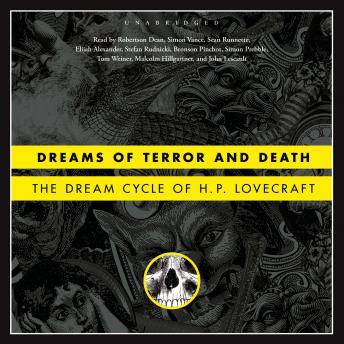 Dreams of Terror and Death: The Dream Cycle of H. P. Lovecraft

This volume collects, for the first time, the entire Dream Cycle created by H. P. Lovecraft, the master of twentieth-century horror, including some of his most fantastic tales, such as:

The Doom That Came to Sarnath—Hate, genocide, and a deadly curse consume the land of Mnar.

The Statement of Randolph Carter—“You fool, Warren is dead!”

The Nameless City—Death lies beneath the shifting sands, in a story linking the Dream Cycle with the legendary Cthulhu Mythos.

The Cats of Ulthar—In Ulthar, no man may kill a cat … and woe unto any who tries.

“[Lovecraft’s] dream fantasy works are as terrifying and haunting as his tales of horror and the macabre. A master craftsman, Lovecraft brings compelling visions of nightmarish fear, invisible worlds, and the demons of the unconscious. If one author truly represents the very best in American literary horror, it is H. P. Lovecraft.”—John Carpenter

Dreams of Terror and Death: The Dream Cycle of H. P. Lovecraft

This title is due for release on December 15, 2013
We'll send you an email as soon as it is available!