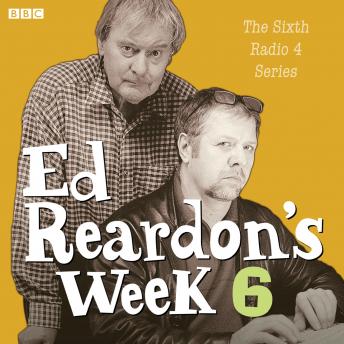 Ed Reardon, author, pipe smoker, consummate fare-dodger and master of the abusive email, attempts to survive in a world where the media seems to be run by idiots and lying charlatans. In these six episodes, Ed is now a happily-retired author. Not only that but he's well fed, warm and happily ensconced in Berkhamsted's premier accommodation of choice for the financially distressed. He has a new member in his writing class, Clive, who is actually impressed by Ed's writing portfolio. But when an opportunity arises to go on a cruise with Jaz and the band, Ed takes up the offer in order to find creative reinvigoration at sea. In addition, Ed is a surprise hit when he takes part in a new Radio 4 'topical quiz with a tasty twist'; finds himself in the money when he sells most of his possessions to a themed wine bar owned by the lovely Violet Carson; and gets a job teaching grammar to some clumsy, apostrophe-ridden phishers. Meanwhile, Elgar finds fame when he becomes an internet hit with his blog. Could Elgar be a more successful writer than Ed? Quite probably... Written by Christopher Douglas and Andrew Nickolds, Ed Reardon’s Week includes supporting roles from Stephanie Cole as Olive, John Fortune as Felix and Barunka O'Shaughnessy as Ping. Ed Reardon's Week was voted Best Radio Programme by the Broadcasting Press Guild.