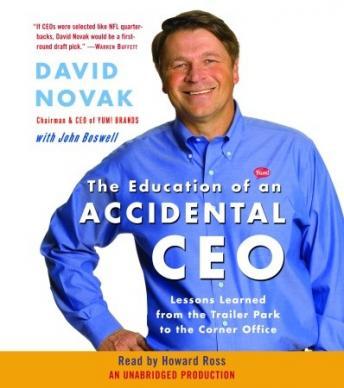 The Education of an Accidental CEO: Lessons Learned from the Trailer Park to the Corner Office

David Novak–one of today’s most engaging, unconventional, and successful business leaders–lived in thirty-two trailer parks in twenty-three states by the time he reached the seventh grade. He sold encyclopedias door to door, worked as a hotel night clerk, and took a job as a $7,200-a-year advertising copywriter with the hopes of one day becoming a creative director. Instead, he became head of the world’s largest restaurant company at the ripe old age of forty-seven.

While David never went to business school, he did learn from the greatest of teachers–experience. His ideas built an entire culture around reward and recognition–getting everyone from division presidents to dish washers to buy into recognizing the achievements of others–and are studied in great detail by other companies. Now he wants to share with you what he discovered about getting ahead and getting noticed; motivating people and turning businesses around; building winning teams and running a company of nearly one million people; and always staying true to yourself.

Whether you are the CEO of a global conglomerate or a budding entrepreneur, David Novak’s street-smart wisdom will help you get where you want to go.

Education of an Accidental CEO: Lessons Learned from the Trailer Park to the Corner Office