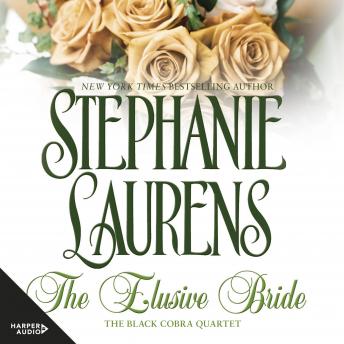 The third stunning novel in NYT bestseller Stephanie Laurens' passionate and compelling series, the Black Cobra Quartet. Four officers of the Crown, aided by Bastion Club members and Cynsters alike, fight to bring down a dangerous enemy - and to win the loves of their lives. Gareth Hamilton is stunned when he recognises Emily Ensworth on?his ship. the veil she wears is not enough to disguise her from him -?or from the man hired to kill her. Whisking Emily to safety, Gareth realises that the Black Cobra is on to them. In order to?protect her, Gareth must reveal to Emily the dangerous plot?in which she is now intimately involved.Emily Ensworth is no wilting flower. She knew the packet the?dying soldier thrust upon her held vital information, and she has?every intention of seeing it into safe hands. But she is also determined?to bring to justice the men who are trying to kill her. together, she and?Gareth do their best to lure the Black Cobra and his men into the open. Putting their lives at risk draws Emily and Gareth ever closer together, the constant danger sparking a passion neither one can resist.?But with threats lurking around every corner, Gareth and Emily?must work harder than ever to make sure that their?newfound love isn't snuffed out before it even has a chance.Praise for the Black Cobra Quartet:'fabulously entertaining' BOOKLISt'Another incredible series connected to the Cynsters and Bastion Club' ROMANtIC tIMES