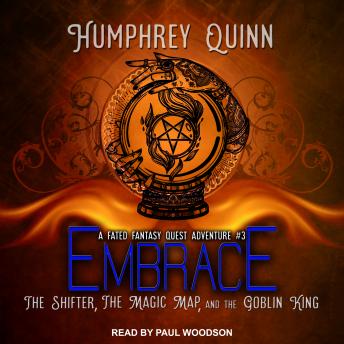 Embrace: The Shifter, The Magic Map, and The Goblin King

#3 of A Fated Fantasy Quest Adventure

In the land of Eidolon, the Goblin King, magic is strictly forbidden! At least that's what everyone's been told. Regardless, it does not stop Colin Jacoby from breaking the rules and using the Magicante to aid in his search for the silver-haired girl who haunts his dreams.

At the same time, his sister and seer, the Firemancer, Meghan Jacoby, is mortified to learn she'll be working alongside Ivan Crane, the one guy she does not want to spend another minute with, when the Gypsy Queen sends them on a dangerous and important quest.

Which means a secret mission into the heart of the Goblin Valley.

Where danger lurks at every turn, questions and mysteries are piling up faster than they can be answered and solved. Where the quest becomes a race against life and death, not just for themselves, but for everyone in the valley. In trying to complete this task, they may just start a war that cannot be won.