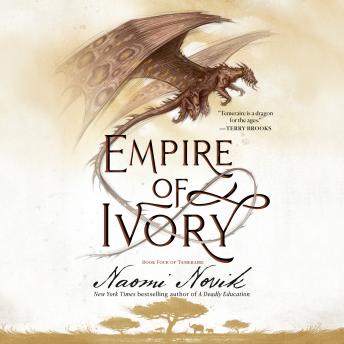 “A new writer is soaring on the wings of a dragon.”
–The New York Times


Tragedy has struck His Majesty’s Aerial Corps, whose magnificent fleet of fighting dragons and their human captains valiantly defend England’s shores against the encroaching armies of Napoleon Bonaparte. An epidemic of unknown origin and no known cure is decimating the noble dragons’ ranks–forcing the hopelessly stricken into quarantine. Now only Temeraire and a pack of newly recruited dragons remain uninfected–and stand as the only means of an airborne defense against France’s ever bolder sorties.
Bonaparte’s dragons are already harrowing Britain’s ships at sea. Only one recourse remains: Temeraire and his captain, Will Laurence, must take wing to Africa, whose shores may hold the cure to the mysterious and deadly contagion. On this mission there is no time to waste, and no telling what lies in store beyond the horizon or for those left behind to wait, hope, and hold the line.


“A gripping adventure full of rich detail and the impossible wonder of gilded fantasy.”
–Entertainment Weekly, on His Majesty’s Dragon

“A thrilling fantasy . . . All hail Naomi Novik.”
–The Washington Post Book World, on His Majesty’s Dragon