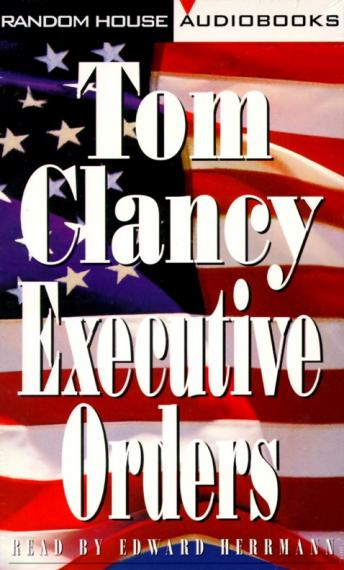 The President is dead—and the weight, literally, of the world falls on Jack Ryan’s shoulders, in Tom Clancy’s newest and most extraordinary novel.

Debt of Honor ended with Tom Clancy’s most shocking conclusion ever; a joint session of Congress destroyed, the President dead, most of the Cabinet and the Congress dead, the Supreme Court and the Joint Chiefs likewise. Dazed and confused, the man who only minutes before had been confirmed as the new Vice President of the United States is told that he is now President.

And that is where Executive Orders begins. Ryan had agreed to accept the vice presidency only as a caretaker for a year, and now, suddenly an incalculable weight has fallen on his shoulders. How do you run a government without a government? Where do you even begin? With stunning force, Ryan’s responsibilities crush on him. He must calm an anxious and grieving nation, allay the skepticism of the world's leaders, conduct a swift investigation of the tragedy, and arrange a massive state funeral—all while attempting to reconstitute a Cabinet and a Congress with the greatest possible speed.

But that is not all. Many eyes are on him now, and many of them are unfriendly. In Beijing, Tehran, and other world capitals, including Washington, DC, there are those eager to take advantage where they may, some of whom bear a deep animus toward the United States—some of whom, from Ryan’s past, harbor intense animosity toward the new President himself. Soon they will begin to move on their opportunities; soon they will present Jack Ryan with a crisis so big even he cannot imagine it.

This title is due for release on August 27, 1996
We'll send you an email as soon as it is available!