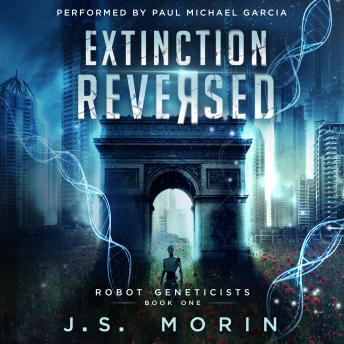 These days, even the humans are built by robots.

Charlie7 is the progenitor of a mechanical race he built from the ashes of a dead world-Earth. He is a robot of leisure and idle political meddling-a retirement well-earned. Or he was, until a human girl named Eve was dropped in his lap.

Geneticists have restored Earth's biome and begun repopulation. But primate cloning is in its infancy; human cloning is banned.

Far from a failed genetics experiment, Eve is brilliant, curious, and heartbreakingly naïve about her species' history. But Eve's creator wants her back and has a gruesome fate planned for her. There is only one robot qualified to protect her. For the first time in a thousand years, Charlie7 has a human race to protect.

Extinction Reversed is the first book in the Robot Geneticists series. For fans of old-school science fiction where robots are people and any problem can be solved (or created) with enough scientists. If you've ever wondered what the world would be like if scientists who'd read I, Robot created a race of robots, or if you ever wondered what might be more dangerous to clone than dinosaurs, this is the series for you.