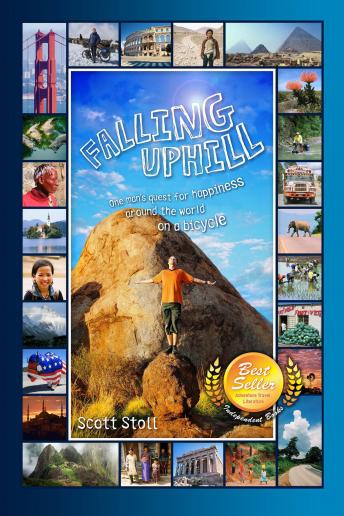 Falling Uphill: One man's quest for happiness around the world on a bicycle.

** New 10th Anniversary Edition of the best-selling travel memoir. Relive Falling Uphill with a new afterword that paints the journey in a new light that only time can tell. Plus new chapters, e-book with color pictures, and much more! **
** Finalist in the 2018 Next Generation Indie Book Awards in the Memoir Category, specifically for Personal Struggle.**
** Bonus content online.**


FROM THE BACK COVER


If you could do anything, what would you do? Falling Uphill is the story of one man's quest for happiness around the world on a bicycle.


In one week, Scott Stoll lost his job, his best friend, his girlfriend and his confidence. Disillusioned with society, full of angst, suffering from depression and with nothing left to lose Stoll asked himself a question: 'If I only have one life, one chance, if I could do anything, what would I do?'


His answer resulted in a 4-year and 25,752-mile odyssey around the world by bicycle using nothing more than a paper map as a guide. Stoll searched for answers to the great mysteries of life, vowing to find happiness or die trying. The quest wasn't easy. He was imprisoned, held hostage, mugged, run over, suspected of terrorism, accused of espionage, nearly trampled by elephants, wounded, diseased, heartbroken-he nearly died a dozen times. But more importantly, Stoll discovered the wonders of the world, kindness among strangers, the meaning of life, peace, love, faith and-Yes!-in the last place left to look, he found happiness.

Falling Uphill: One man's quest for happiness around the world on a bicycle.