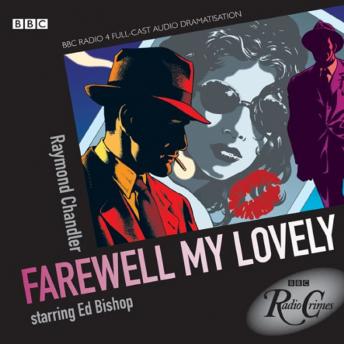 Farewell, My Lovely is a classic novel by Raymond Chandler, the master of hard-boiled crime.

Eight years ago Moose Malloy and cute little redhead Velma were getting married - until someone framed Malloy for armed robbery. Now his stretch is up and he wants Velma back. PI Philip Marlow meets Malloy one hot day in Hollywood and, out of the generosity of his jaded heart, agrees to help him. Dragged from one smoky bar to another, Marlowe's search for Velma turns up plenty of dangerous gangsters with a nasty habit of shooting first and talking later. And soon what started as a search for a missing person becomes a matter of life and death . . .

'One of the greatest crime writers, who set standards others still try to attain' Sunday Times

'Chandler is an original stylist, creator of a character as immortal as Sherlock Holmes' Anthony Burgess

Best-known as the creator of the original private eye, Philip Marlowe, Raymond Chandler was born in Chicago in 1888 and died in 1959. Many of his books have been adapted for the screen, and he is widely regarded as one of the very greatest writers of detective fiction. His books include The Big Sleep, The Little Sister, Farewell, My Lovely, The Long Good-bye, The Lady in the Lake, Playback, Killer in the Rain, The High Window and Trouble is My Business.