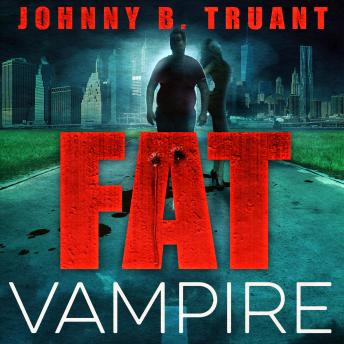 Death Has a Whole New Appetite.

When overweight treadmill salesman Reginald Baskin finally meets a co-worker who doesn't make fun of him, it's just his own bad luck that tech guy Maurice turns out to be a two thousand-year-old vampire.

And when Maurice turns Reginald to save his life, it's just Reginald's further bad luck that he wakes to discover he's become the slowest, weakest, most out-of-shape vampire ever created ... doomed to 'heal' to his corpulent self for all of eternity.

But as Reginald struggles with the downsides of being a fat vampire (too slow to catch people to feed on, mocked by those he tries to glamour, assaulted by his intended prey and left for undead), he discovers rare powers in himself that few vampires have ... and just in time, because the Vampire Council wants him destroyed as an inferior representative of their race.

Fat Vampire is the story of an unlikely hero who, after having an imperfect eternity shoved into his grease-stained hands, must learn to turn the afterlife's lemons into tasty lemon danishes.

'Truly original and a very fun, witty take on the 'done to death' vampire story.'

'If Eric Northman [from True Blood] ever gets staked, Reginald Baskin will be my new favorite vampire.'

'Got the book just before bed... Next thing I knew it was the wee hours of the night... It was impossible to put down.'

Fat Vampire is a fresh twist on the tired old undead myth by Johnny B. Truant - author of many bestselling series including Invasion, The Beam, Unicorn Western, The Dream Engine, Robot Proletariat, and more. You can find more about Johnny (including his podcasts and nonfiction work) at SterlingAndStone.net.