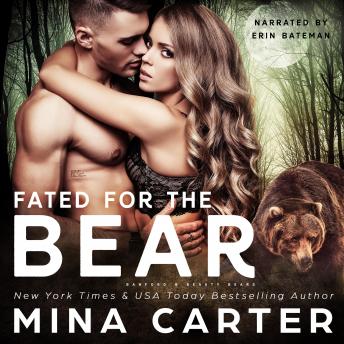 Fated For The Bear

Girl meets boy = classic love story. Girl meets bear... Wait, what?
Kacie has always known there was something odd about the small town of Beauty, but she doesn't expect that oddity to almost claim her life or land her in the arms of her long-term crush; hot veteran Dean. Okay, he's nuts but she can't argue with that, not with a body like his or when he's whispering things like 'fated' and 'destiny'. Even if he does claim to be a werebear...
She's his mate, but she's human. He's so screwed...
Leader of the Beauty bear clan, Dean is between a rock and a hard place. His fated mate is human but he daren't claim her. The elitist asshats in the clan would have kittens. But when an attack brings her over into the bear world, he's out of time and out of options. Even worse, the town has an rogue bear problem and internal clan politics that put Kacie in the crossfire.
Forced to fight battles on all fronts, Dean must bear up or risk losing her forever...
PLEASE NOTE: This title was previously released as 'BEAR UP' in the More than Mated Kindleworld.

Fated For The Bear