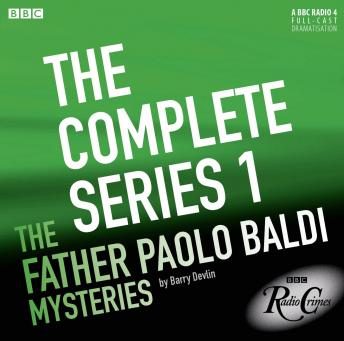 On sabbatical from the Franciscan order, Father Paolo Baldi is working as a philosophy lecturer in Dublin when his life takes an unexpected turn and he finds himself helping the police to solve crimes. In this first series, Father Paolo Baldi and his accomplice Tina investigate a string of mysterious crimes, including a murder at an Italian chip shop, the killing of a leading academic and a girl who falls victim to a devil-worshipping cult. Follow the priest-cum-sleuth’s thrilling adventures as he solves mysteries throughout Ireland. The episodes included are: The Prodigal Son, Keepers of the Flame, Miss Lonelyhearts, The Emerald Style, Death Cap and Devil Take the Hindmost. David Threlfall, Tina Kellegher and T.P. McKenna star in this exciting series written by Simon Brett, Barry Devlin and Annie Caulfield in the series created by Barry Devlin.