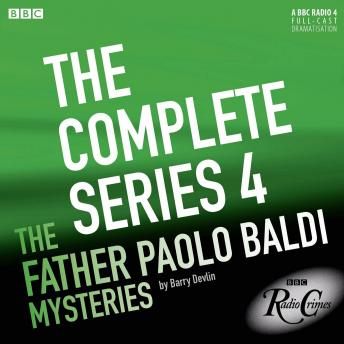 On sabbatical from the Franciscan order, Father Paolo Baldi is working as a philosophy lecturer in Dublin when his life takes an unexpected turn and he finds himself helping the police to solve crimes. In Father Baldi’s fourth series, Paolo investigates a string of curious murders. Along with Tina, Paolo looks into the case of a crossword-related murder, the killing of a politically-incorrect figurehead and finds that the death of a homeless man is not as simple as it appears. Follow the priest-cum-sleuth’s thrilling adventures as he solves mysteries throughout Ireland. Includes the following episodes: Cross Purposes, The Devil’s Eye, The Smoker, No Sin, The Empty Vessel and Shelter. David Threlfall, Tina Kellegher and T.P. McKenna star in this exciting series written by Simon Brett, Bill Murphy, Andrew Martin, Martin Meenan, John Murphy and Francis Turnly in the series created by Barry Devlin.