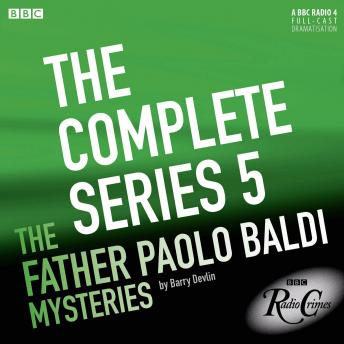 On sabbatical from the Franciscan order, Father Paolo Baldi is working as a philosophy lecturer in Dublin when his life takes an unexpected turn and he finds himself helping the police to solve crimes. Returning for his fifth series, Father Baldi investigates a string of curious murders. Along with Tina, Paolo uncovers the truth behind the killings of several rockabilly band members, as well as delving into the highly competitive world of celebrity chefs and exposing a rift in a community of environmental activists. Follow the priest-cum-sleuth’s thrilling adventures as he solves mysteries throughout Ireland. The episodes included are: The Million Dollar Question, A Very Neglected Fish, A Green Murder and Food of the Blue. David Threlfall, Tara Flynn and T.P. McKenna star in this exciting series written by Barry Devlin, John Murphy, Andrew Martin and James McAleavey in the series created by Barry Devlin.