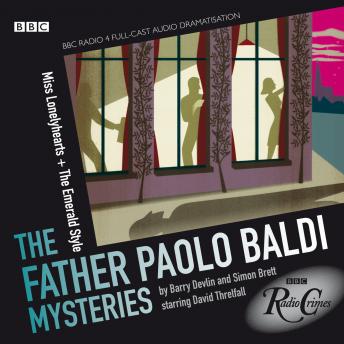 On sabbatical from the Franciscan order, Father Paolo Baldi is working as a philosophy lecturer in Dublin when his life takes an unexpected turn and he finds himself helping the police to solve crimes. In Miss Lonelyhearts, Paolo and DI Tina Mahon investigate the mysterious circumstances surrounding the tragic death of a nurse at an old people’s home, and uncover an unlikely case of voyeurism. The Emerald Style finds Paolo attempting to wine and dine his spiritual director, Father Troy, at a leading Dublin hotel – but their meeting is interrupted by a murder taking place behind the scenes that very evening. These two full-cast BBC Radio 4 dramatisations star David Threlfall as Father Paolo Baldi. ‘Paolo Baldi... has become something of a Radio 4 institution.’ - Independent.