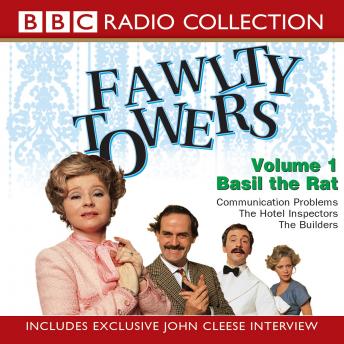 Fawlty Towers has become a landmark in comedy history, with its twelve episodes being shown again and again on television. These four episodes feature more of the hilarious antics of Basil, Sybil, Polly and the hapless Manuel. In 'Communication Problems', Basil has to contend with Mrs Richards, a deaf battle-axe who leaves her hearing aid off to conserve batteries. But, even his whispers are picked up by Sybil, especially when it comes to a certain horse running in a certain race. In 'The Hotel Inspectors', news that hotel inspectors are in the area sends Basil into a frenzy of excessive rudeness and then, believing one of the guests is an inspector, excessive fawning. 'Basil the Rat' sees Manuel getting a new pet, but Basil thinks the 'Siberian Hamster' is nothing more than a rat - just what he doesn't need with a public health inspector on the loose. And in 'The Builders', Basil soon finds out why O'Reilly and his men come cheap when he scraps Sybil's builder in favour of his own. Will he be able to repair the damage before Sybil returns? With John Cleese, Prunella Scales, Andrew Sachs and Connie Booth. Llinking narration by Andrew Sachs.