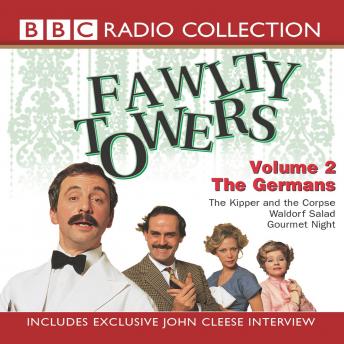 Fawlty Towers has become a landmark in comedy history with its twelve episodes being shown again and again on television. This collection contains four more episodes featuring the antics of Basil, Sybil, Polly and the hapless Manuel. In 'The Kipper and the Corpse', when a guest dies in his bed, it's only the beginning of Basil's problems as he tries to hide the body and the dodgy kippers which may have led to the guest's demise. 'The Germans' sees Basil trying to cope while Sybil is in hospital, but soon everything is in chaos and a deranged Basil does the funny walk for a group of German tourists. In 'Waldorf Salad', quality customer service has never been one of Basil's strong points, so when an American guest demands the comforts of home, Basil's blood pressure reaches boiling point. And in 'Gourmet Night', the cream of Torquay society turns out for a gourmet night. Expectations are high but so is the chef, leaving Basil to hunt down a suitable main course. Also contains extracts from an interview with John Cleese.