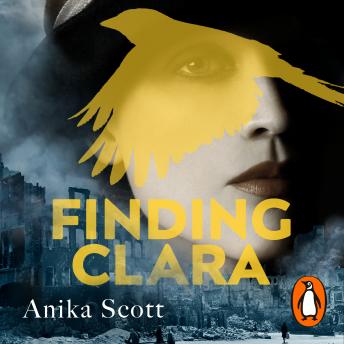 Finding Clara: a page-turning epic set in the aftermath of World War II

'FINDING CLARA is the kind of novel we need now more than ever, [and] achieves what the best historical fiction can . . . pushing us to see ourselves in that past, demanding: Who would you have been then? What would you have done? Unflinching and absorbing, [it] does not let you look away.' Sarah Blake, New York Times bestselling author of THE POSTMISTRESS

1946. The ruins of Essen, Germany. A place that can't quite believe the Second World War has been lost.

There's Clara. Once a wartime icon and heiress to the Falkenberg iron works, she now finds herself on the run from the Allied authorities, accused by the zealous Allied occupiers of complicity in her father's war crimes.

There's Jakob. A charming black marketeer, badly wounded in the war but determined to help what's left of his family survive the peace.

There's Willy. A teenage boy diligently guarding a mine full of Wehrmacht supplies, his only friend a canary named Gertrud. Convinced the war isn't over, he refuses to surrender his post.

When Clara returns to her hometown expecting to find her best friend, she finds everything she once knew in ruins. But in war-ravaged Germany, it's not just the buildings that are scarred: everyone is changed, everyone lives in the wreckage of their own past.

To survive, Clara must hide who she is. But to live, she must face up to the truth of what she's done.

'What a great debut! It still haunts me, days after finishing it.' Liz Trenow, author of The Poppy Factory and The Silk Weaver

'Anika Scott's finely drawn characters in FINDING CLARA bring to life not only the struggle to rise from the ashes of war, but also the depth of resolve often required to gain redemption. Illuminating and beautifully rendered.' Susan Meissner, author of The Last Year of the War

'Meticulously researched and plotted like a noir thriller, Finding Clara tells a different story of WWII - of characters grappling with their own guilt and driven by the question of what they could have done to change the past.' Jessica Shattuck, author of The Women in the Castle

'A moving story of courage and everyday heroism rising to meet unbearable challenges.' Alex Marwood, author of The Wicked Girls

Finding Clara: a page-turning epic set in the aftermath of World War II