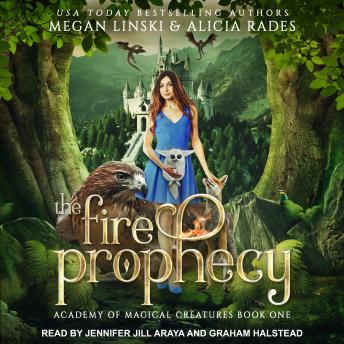 Sophia: I'm Sophia Henley, your typical college freshman. I never expected a lion to be stalking me, nor for fire to come shooting out of my hands to protect my sister. Next thing I know, a drop-dead gorgeous guy shows up on my doorstep to sweep me away to a magical school, where I'll learn to control my element and bond with a powerful creature called a Familiar.

I don't believe I'm the savior of an ancient tribe, or the missing piece of a prophecy that's more myth than reality. Worst of all, I'm forced to enter the Elemental Cup, where I'll either earn my place in this society . . . or die trying.

Liam: The night I met Sophia, I didn't think we'd form an undeniable connection. But I'm from the Water tribe, and she's fire. I'm forced to push her away even as I'm falling for her.

I lost everything, yet Sophia makes me whole again. Our world is fixed on keeping us apart, but we're in this tournament together. We have to keep each other alive at any cost-or I'll give my life for hers.

It's pretty clear. If I continue to play with fire, I'm going to get burned.