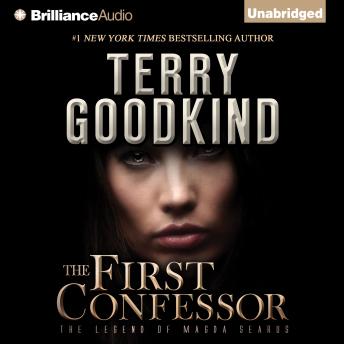 In a powerful novel set millennia before the lives of Richard Rahl and Kahlan Amnell, Terry Goodkind reveals the story of a remarkable woman whose struggles and triumphs gave birth to more than the Confessors...they gave birth to the Sword of Truth itself.

Married to the powerful leader of her people, Magda Searus is protected from a distant war. But when her husband, a man who loved life and loved her, unexpectedly commits suicide, she suddenly finds herself alone. Because she is ungifted herself, without her husband she no longer has standing among her people. She is isolated in a society that seems to be crumbling around her.

Despite her grief, she is driven to find the reasons behind her husband's death-why he would abandon everyone he loved at such a dangerous time. She discovers that there may be more to her husband's suicide than anyone knew.

With no one to help her, she must find a mysterious spiritist in order to speak with the dead. This quest may also be her last chance to unravel what is really behind the mysterious events befalling her people. What she discovers along the way is that the war is going far worse than she knew, and that the consequences of defeat will be more terrifying for her and her people than she could have imagined.

As mortal peril closes in around her, Magda learns that she is somehow the key to her people's salvation. Journey with Magda Searus into her dark world, and learn how true legends are born.

BEFORE PROPHECY, BEFORE THE SWORD OF TRUTH, THE BOXES OF ORDEN RULED THE FATE OF MANKIND.