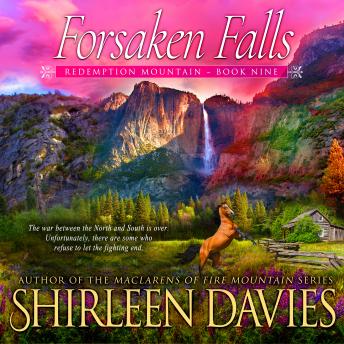 Forsaken Falls, Book Nine, Redemption Mountain Historical Western Romance SeriesThe war between the North and South is over.Unfortunatelyre are some who refuse to let the fighting end.Wyatt Jackson has lost everything. Successful in his role as a soldier, he can no longer find a home in the region he fought so hard to save. Sick and on the edge of starvation, he journeys west, searching for the one man who might help him. A deputy in Splendor, Montana.Nora Evans has never found a place to call home. The illegitimate outcast of a wealthy New York family, her father sends her west to a step-brother who has no knowledge of her existence. Considering herself a spinster at twenty-nine, she focuses on building a new life, believing love and marriage hold no place in her future. Not even to the handsome, younger ranch hand she can't push from her thoughts.Accepting a position at Redemption's Edge, Wyatt uses the one skill he perfected before the war-training horses. It's his gift, and he loves the work. There's no room for romance, even if he can't stay away from the beautiful sister of the town's sheriff.Nora tries hard to ignore the intense desire she feels when Wyatt is near. It's especially difficult when his continued attention gives her hope she'd long thought buried.Aside from their own misgivings, another menace lurks close by, threatening Nora, Wyatt, and the people they care about. Men who'd love nothing more than to see him dead prowl the lands around Splendor, biding their time, waiting to exact revenge.As much as they yearn for each otherir personal pasts stand in the way. But the bigger obstacle may be the one they don't see. A danger perpetrated by men who can't leave the war behind.Forsaken Falls, book nine in the Redemption Mountain historical western romance series, is a full-length novel with an HEA and no cliffhanger.Book 1: Redemption's EdgeBook 2: Wildfire CreekBook 3: Sunrise RidgeBook 4: Dixie MoonBook 5: Survivor PassBook 6: Promise TrailBook 7: Deep RiverBook 8: Courage CanyonBook 9: Forsaken Falls