Four Treasures of the Sky: A Novel 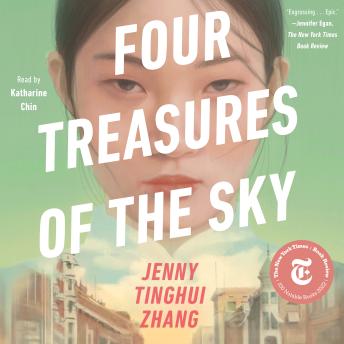 This program includes a bonus conversation between the author and editor.

A propulsive and dazzling debut novel set against the backdrop of the Chinese Exclusion Act, about a Chinese girl fighting to claim her place in the 1880s American West

Daiyu never wanted to be like the tragic heroine for whom she was named, revered for her beauty and cursed with heartbreak. But when she is kidnapped and forced across an ocean from China to America, Daiyu must relinquish the home and future she imagined for herself. Over the years that follow, she is forced to keep reinventing herself to survive. From a calligraphy school, to a San Francisco brothel, to a shop tucked into the Idaho mountains, we follow Daiyu on a desperate quest to outrun the tragedy that chases her. As anti-Chinese sentiment sweeps across the country in a wave of unimaginable violence, Daiyu must draw on each of the selves she has been—including the ones she most wants to leave behind—in order to finally claim her own name and story.

At once a literary tour de force and a groundbreaking work of historical fiction, Four Treasures of the Sky announces Jenny Tinghui Zhang as an indelible new voice. Steeped in untold history and Chinese folklore, this novel is a spellbinding feat.

'Jenny Tinghui Zhang uses her considerable talents to illuminate the shocking injustices the Chinese in this country suffered in the 1800s, and in doing so, makes us stop and consider how much of that cruelty and injustice survive to this day. Four Treasures of the Sky is an engulfing, bighearted, and heartbreaking novel.'—Ann Patchett


“In a sweeping adventure that spans China and the American West, Jenny Tinghui Zhang has crafted a thoughtful story of identity, love, and belonging.”—C Pam Zhang, author of How Much of These Hills Is Gold

“Brilliant and devastating, Four Treasures of the Sky tells the story of Daiyu, who is brought to America against her will and forced to hide who she is even as she grows into her true self. Weaving together myth and history, Zhang’s work is both timeless and utterly necessary right now.”—Anna North, New York Times bestselling author of Outlawed

Four Treasures of the Sky: A Novel

This title is due for release on April 5, 2022
We'll send you an email as soon as it is available!